Since fiscal year (FY) 2014, Landis Avenue in the City of Vineland has been receiving federal funds through SJTPO for corridor improvements. Landis Avenue serves as “Main Street” in Vineland, and is home to many shops, municipal buildings, churches, hotels, big-box stores, and more. Six stages of improvements are planned for the three-mile stretch of Landis Avenue beginning at Myrtle Street and working westward to Route 55. Planned improvements include new pavement, upgrades to sidewalks and crosswalks, bulb-outs to reduce pedestrian crossing distance, mid-block crossings, improved pavement markings, and traffic signal upgrades. To date, from FY 2014 to FY 2018, $4,403,000 in funding has been made available through SJTPO’s federal resurfacing allocation, Surface Transportation Block Grant Program – South Jersey (STBGP-SJ), and Congestion Mitigation & Air Quality (CMAQ) funds.

Phase one of the project, referred to in the FY 2014-2023 Transportation Improvement Program (TIP) (available here) as Landis Avenue, Myrtle Street to Boulevards, Resurfacing began in FY 2014. This phase received $632,000 in Surface Transportation Program-South Jersey (STP-SJ) funds and went to the mill and overlay of Landis Avenue from Myrtle Street to the Boulevards. Mill and overlay refers to a typical roadway repavement, where the top inches of asphalt are milled or removed then an overlay of new asphalt is put in place. Bulb-outs at intersections to improve safety for pedestrian cross and highly visible mid-block crossing were also added. Further, traffic signals were replaced. The traffic signal upgrades were funded through CMAQ for $1.014 million. The signal upgrades included mast arms and signal heads, larger and brighter bulbs, cameras to detect traffic waiting on side streets, and improved timing of signals. 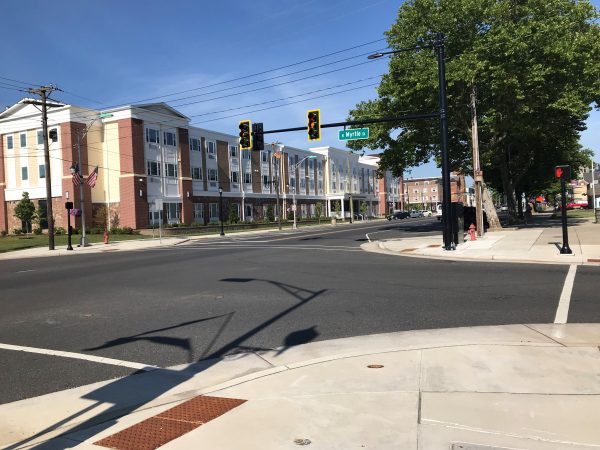 At the intersection of Landis Avenue and Myrtle Street, new striping, bulb-outs to reduce pedestrian crossing length, and newly installed traffic signals with improved lighting are all improvements funded through the SJTPO.

The second phase began in FY 2015. Known as the Landis Avenue, Phase II, West Avenue to the Boulevards (County Route (CR) 615S), the project received $632,000 from STP-SJ funding, the same source as phase one. The funds went to various improvements including the mill and overlay of the roadway, widening the existing right-of-way, removing and replacing concrete items, such as curbs or other drainage features, rehabilitation of the existing storm sewer infrastructure, and bulb-outs, as needed. Traffic signal upgrades were authorized in October of 2017 for $873,300 in CMAQ funding.

In FY 2015, $50,000 in funds went to the design of Landis Avenue, Phase III, Coney Avenue to West Avenue. Then in FY 2016, construction began. $670,000 in STATE-SJTPO funds was used to mill and overlay the roadway, widen the existing right-of-way, removal and replacement of concrete items, such as curbs or other drainage features, and rehabilitation of the existing storm sewer infrastructure, as needed.

Landis Avenue, Phase IV, Orchard Road (CR 628) to Moyer Street, milepost (MP) 8.69 to 9.09 was funded in FY 2017 with STP-SJ funds. Much like phase three, the $609,000 in funding for phase four went to the mill and overlay of the given roadway corridor, widening the existing right-of-way, removal and replacement of concrete items, such as curbs or other drainage features, and rehabilitation of the existing storm sewer infrastructure, as needed. Traffic signal improvements are planned, with authorization pending.

The sixth and final phase of the final corridor improvement, known as Landis Avenue, Mill Road to Rt. 55 began with design in FY 2018. The design for the improvements cost $50,000 and was funded through STBGP-SJ funds. In FY 2019, the SJTPO intends to fund the construction portion of the improvements. The improvements will include the mill and overlay of the roadway within the existing right-of-way, removal and replacement of concrete items, and rehabilitation of the existing storm sewer infrastructure, as needed. The improvements are expected to cost $1,300,000. An update for phase six will be provided when applicable.